As an owner of a female beagle and a male Japanese Akita, I have an easy time distinguishing the former as incredibly vocal. Unlike the Akitas, which are excellent guard dogs but don’t bark or howl a lot, beagles enjoy communicating their emotions and needs through barking, yapping, and plenty of other sounds.

The only time when my beagle Mia isn’t vocally expressive is during her beauty sleep time. To deal with all the chit-chatting that she puts up, I spent a lot of time understanding why she barks excessively. Only when I detected the triggers could I figure out training methods to cope with this “issue.”

The idea of this article is to share my experience and try to help you manage this vocal breed, whether you currently have a beagle or you are just about to get one. Let’s get started!

Beagles and Their Vocal Expression in Hunting Before getting a beagle that will make friends with my Japanese Akita, Aslan, I spent hours researching its background. These scent hounds are descendants of dogs used in Ancient Greece and Ancient Rome to detect hares. Strongly competing against the Foxhound, which rose in popularity during the 19th century, the beagle managed to come out on top and be considered one of the best hunting breeds for hares/small game.

Although I didn’t go after a small game or a hare with Mia, I am sure that she would be successful after a bit of training. Their first hunting trait is driving trails that refers to guiding the potential prey towards you as a hunter. Furthermore, this vocal breed is known for its alertness and high energy, which is just perfect if you are out hunting in the woods.

Yes, my neighbors may not be too happy when they hear Mia howling or baying in the middle of the night, but these sounds are of the utmost importance when hunting. The bay comes in between a regular bark and a howl, deep and potentially heard far in the woods. In most cases, consecutive bays suggest that your beagle has found prey and wants you to come.

On the other hand, the familiar bark is used to manipulate and harass the prey, fox, or other small game that they are after. This stimulates the mark into running away, making it much easier for your dog and you as a hunter to go after and catch it. For this reason, it is essential to teach your beagle when to bark and when to keep quiet (restricting barking/baying in total isn’t recommended).

Characteristics of a Modern Beagle

What I found, comparing my Mia, which belongs to the first group, is that both types have beautiful houndy ears, with a pleasing face, and eyes that are brown/hazel. There are a couple of combinations for the fur color, including tri-color (most popular), lemon, and red/white.

Onto the “Barking Issue”: Few Types of Beagle Sounds After consulting with a few experienced beagle owners, my first step was to distinguish the sounds that Mia was making and thus understand what she is trying to express. The first one was a familiar bark, short and high-pitched. As I found out while training her, Mia uses these sounds for communicating her needs (such as that she is hungry or bored). You should know that, unlike humans, beagles, and dogs, in general, don’t make high-tone noises when they are in pain but relatively soft moans and “yelps.”

The second one is what they call a “bay” and stands in between a typical bark and a long howl. Once again, a fantastic way to get your owner’s attention. Lastly is the howl, which comes in the form of a straight and long sound that Mia uses when she wants to alarm me on a stranger approaching the house.

Before I can present you with a few training methods, it is essential to determine the barking issue’s roots:

What Is the Most Efficient Method to Correct Your Beagle?

At first, I did have a lot of trouble detecting the trigger of Mia’s excessive barking. I made common mistakes such as shouting “no,” “enough,” and trying to prevent her further vocalization with noise and clapping. She interpreted this as me joining in for the game, and I can’t blame her. You will find that there are moments when none of the training methods and tips work – for that reason, it is essential to get an interruption spray.

Although it sounds like a harmful item, it isn’t – the idea is to spray it away from your beagle and thus interrupt them from whatever they are doing. Believe me; this is a much better option than shock collars which are proven to be harmful to the dogs. In the end, the idea isn’t to traumatize your scent hound but rather to recover their focus.

Much like most other dogs, beagles have incredible hearing. For example, I live in an urban area where many sirens or car alarms are off. At first, this disturbed and aggravated Mia as her initial reaction would be to run home and bark as loud as she can. Luckily, I consulted with a couple of friends and found two coping methods for this issue. Throughout this article, I tried to explain that dogs barking is much similar to our speaking. Thus, restricting it entirely is wrong and will result in an anxious and irritated dog. On the other hand, if your beagle isn’t barking to alarm you, or remind you that it is time for a walk/food, then there are a few steps you should take to prevent unwarranted barking: Beagles are an amazing choice both for you who are looking for a hunting dog and anyone else that wants a gentle and intelligent companion. It is essential to understand that barking, baying, and howling are integrated into this breed’s natural behavior. Thus, you can’t deny their need to be vocally expressive (and you shouldn’t), but it is essential to train them in situations in which it is entirely unnecessary. Both barking and baying are vital for driving down and harassing the prey, which is why experienced hunters love beagles.

As for what you can do to control excessive barking, the first step is defining the trigger. It helped me a lot when training Mia as I was able to recognize when she barks out of hunger/boredom and when it is out of alertness. Throughout the article, I focused on the importance of desensitizing your dog to different situations, people, and animals, as fear of the unknown is one of the most common causes. Also, no matter how hard it is, you should ignore unwarranted barking and avoid giving your beagle traits (reinforcing negative behavior).

In the end, the two essential elements are love and patience. When I got this covered, nothing could step in the way of my communication with Mia. Good luck! 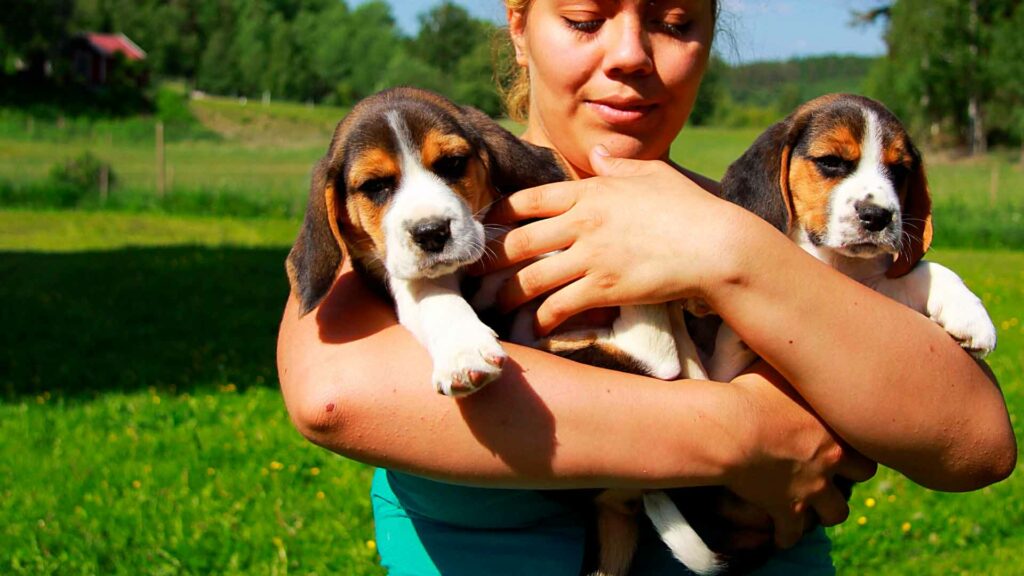 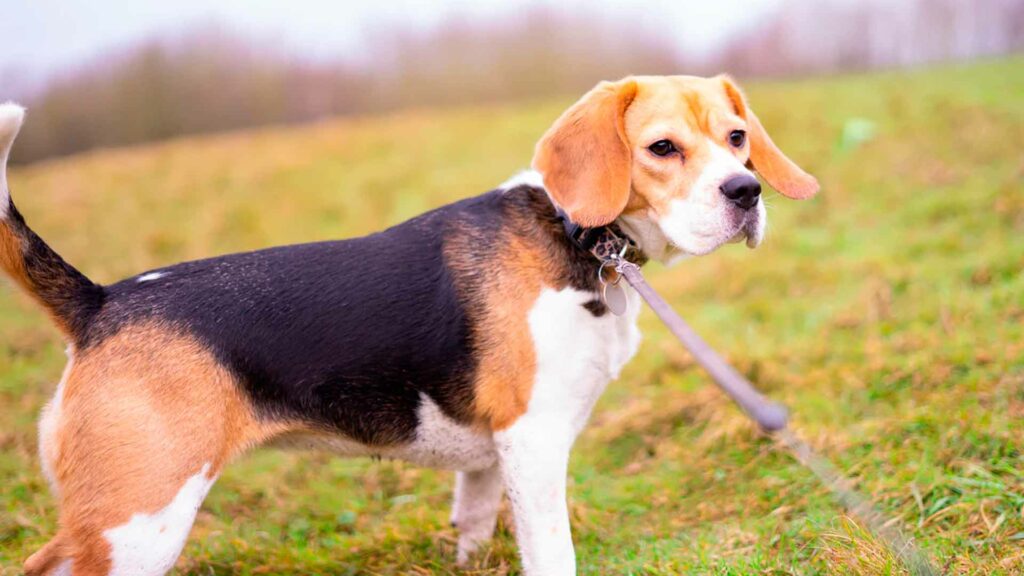 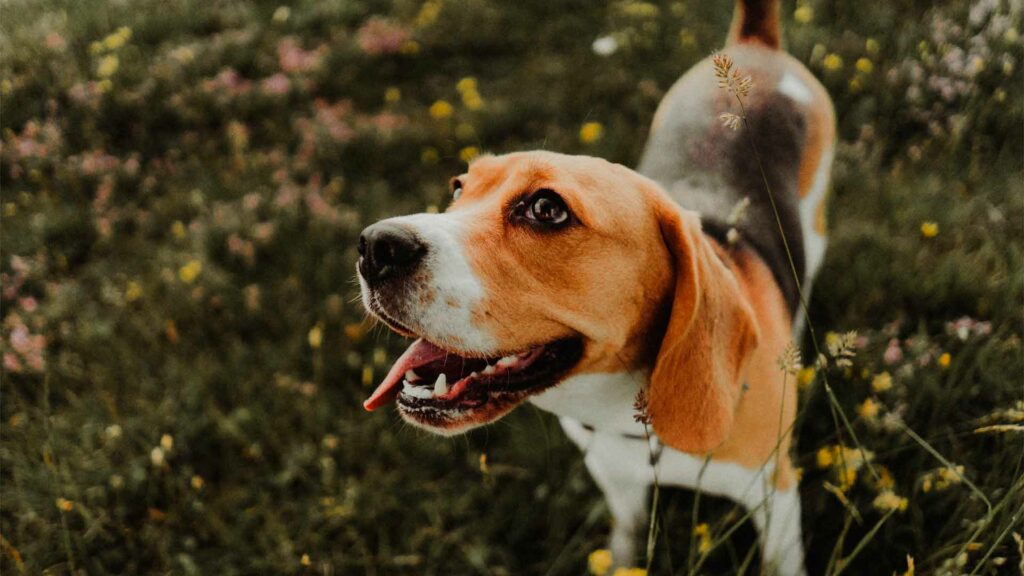 Why Do Beagles
Howl?