Will Neutering A Dog Help With Aggression?
[The Definitive Guide]

Aggression in male dogs can be frustrating, annoying, and scary – can it be nipped in the bud by neutering them?

There can be many causes of behavioral aggression in dogs; from frustration to anxiety, they all can cause problem behavior. If you haven’t neutered your dog, you may be wondering if this procedure can quickly nip these aggressive tendencies in the bud.

If you’re feeling confused about whether or not to neuter your dog, or maybe you’re wondering why your dog is being so aggressive, don’t worry! Here is a complete breakdown of what neutering is and if it can help reduce aggressive behavior in male dogs.

Why do we neuter dogs? 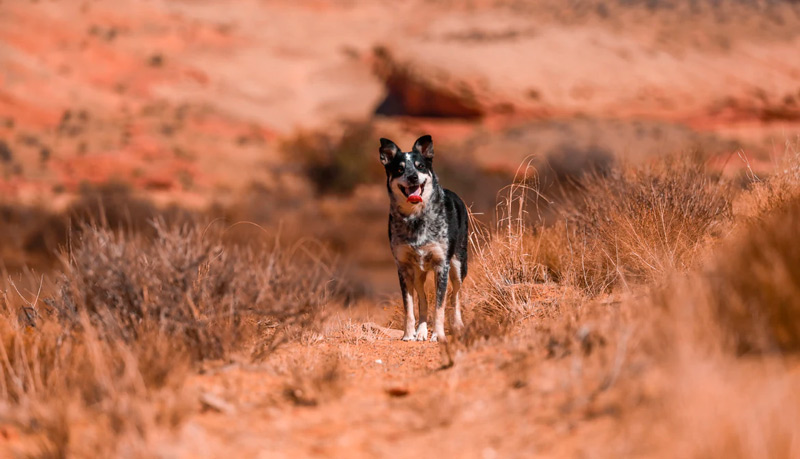 If you’ve recently bought a new pup into your home, you are probably wondering if you should neuter them. The most common reasons for castrating dogs are preventing unplanned babies and reducing some health risks and aggression.

It’s believed that the surgery can diminish certain behavior issues and reduce roaming in male dogs. Other behavioral issues it can help with are leg-lifting and mounting. Aggressive behavior is often a major key when castrating some puppies.

When deciding to get the procedure for your dog, always contact a veterinarian to discuss the procedure and get a professional opinion. Puppies as young as a few months old can undergo the procedure, and most sources suggest that the pup should be neutered before puberty.

What does castration do?

If you haven’t owned a dog before, this may be a new concept for you. Before we go ahead and explain the links between sterilizing and aggression in male dogs, here’s a quick explanation of the process!

Neutering (or castration) is when a male dog’s testes are surgically removed; this surgery is performed under general anesthesia and is more simple than a spay. Spaying (or medically known as an ovariohysterectomy) is the surgical procedure that removes a female dog’s uterus and ovaries. This is performed via an incision in the abdomen.

There are known benefits to neuter your dogs, one of which being medical benefits. Neutering your pet will eliminate the possibility of testicular cancer and will also reduce the chance of prostate disease. These are two very common illnesses in older dogs that haven’t been neutered. Neutering can also reduce the risk of perineal hernias and perianal tumors too.

Another benefit of neutering is population control. Millions of dogs get left at animal shelters annually. Unfortunately, this can often end in them being put down due to capacity issues. Neutering, as well as spaying, eliminates the chance of any accident puppies.

Neutering can also help your dog be calmer and cleaner. When dogs have that urge to mate, it can be hard for them to settle down and be still. This can result in dogs giving out discharges that can stain sofas and other household fabrics. Also, dogs tend to roam outside so often sustain marks, sores, and other minor injuries.

Though dogs remain inactive for a couple of weeks after being neutered (when healing), this doesn’t cause excessive weight gain as most people expect. Make sure to be mindful of exercise and diet as your dog heals. 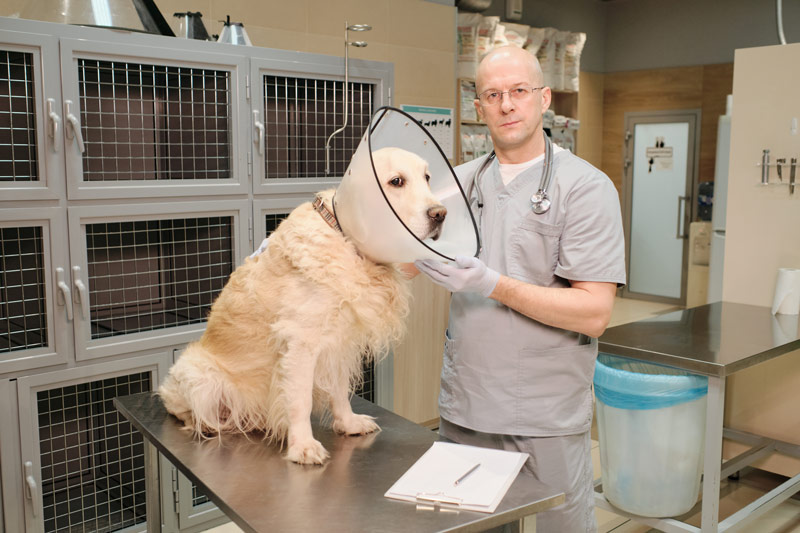 Thankfully, with medical and veterinary advancements, there are few risks to surgery these days. The majority of young dogs recover without complications from the surgery and anesthesia; however, this isn’t always the main concern. When in recovery, the dog shouldn’t lick the incision scar until fully healed. The dog will have to be continuously monitored to make sure healing is healthy; there are bitter-tasting creams and protective collars to help with this.

When older dogs are considered for neutering, it’s best to get veterinary advice as sometimes there are more risks associated with surgery and anesthetic. The anesthetic is usually the main concern for them. If neutering is needed for a medical reason (such as tumors), surgery is generally advised. If the older dog displays behavioral issues (e.g., roaming, mounting, and aggression), the surgery can still be performed but isn’t always advised.

Since neutering causes hormonal changes in dogs, other changes related to hormone activity can occur. One of these is your dog’s coat texture. Neutered dogs tend to be more sensitive to cold and hot temperatures, and due to this, the coat growth patterns can shift.

Unfortunately, sometimes the surgery can also cause urinary inconsistency. Though this is not very common, sometimes, when neutered, young dog’s bladders are not fully formed, and as the dog ages, the bladder muscle will become weaker and result in urine leakage. The best way to prevent this is to neuter your dog when they’re older than six months. This is a rare occurrence that happens mostly in female dogs.

Sometimes castration can also affect the dog’s advancement process in later years as they’re not fully grown when neutered. This is not common but is worth discussing with your veterinarian before you go through with the surgery.

Neutering doesn’t guarantee a change in aggressive actions; while it does eliminate some problems directly linked with hormones, other types of behaviors are not guaranteed to disappear – such as food guarding or types of anxiety.

When neutered, some behaviors can change; these are the ones directly controlled by male hormones.
It’s important to remember that a dog’s training, personality, and temperament are results of genetics and upbringing – not hormones. This means that neutering will not calm an excitable dog, so ensure research and get a second opinion if you are neutering for behavioral reasons.

Once neutered, behaviors driven by hormones should reduce gradually as the hormones are produced via the testes.
Male behaviors should vanish over gradually over a few weeks or even months – patience is key! 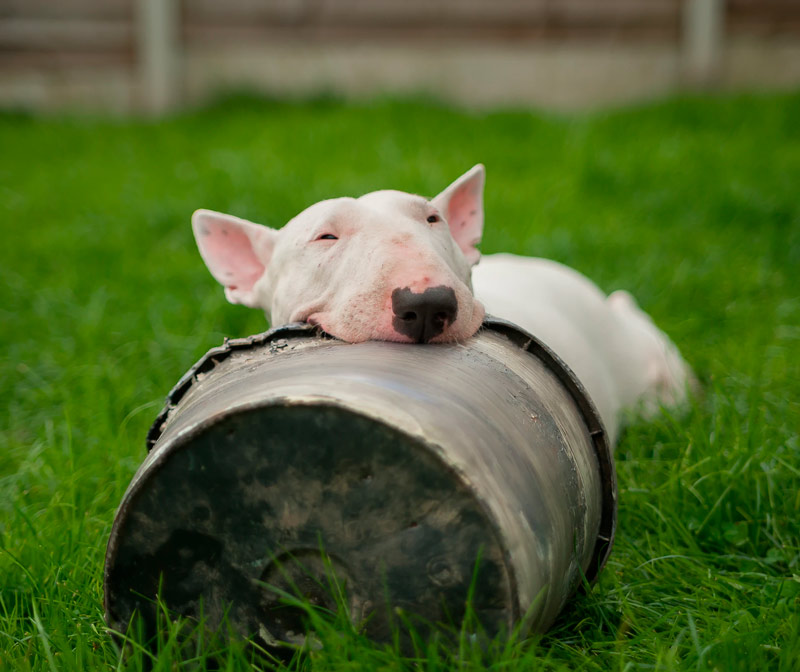 There are various types of aggression that dogs often show; these are unpleasant and can be scary if you have young children. Aggression is usually demonstrated through a variety of actions such as barking, snapping, lunging, growling, snarling, and even biting.

It’s not normal for a calm and loving dog to suddenly become aggressive for no reason, so checking the cause of the aggression before treating it is essential.

Here are the most common types of aggression in dogs:

Frustration often occurs in dogs when they’re fighting, and someone tries to stop the fight. It can also be shown when an animal or person tries to stop them from being aggressive to another dog. They can also get frustrated when they’re unable to get something when someone else is interfering. When these behaviors are shown, the dog is affected by redirected aggression and can be seen in puppies or adults.

When a dog is attached to a leash and feels restrained, uncomfortable, and frustrated, leash aggression can be shown. The dog often becomes aggressive because they can’t do anything about their situation. If your dog’s aggression is isolated to when they’re being walked, this is a sign of leash aggression.

The most common reason dogs develop aggressive behavior is fear, especially towards other dogs. Fear can cause dogs to exhibit aggressive behavior towards other dogs and humans. If a dog feels it can’t escape or is in danger, they often react with aggression. This can be shown through barking violently or growling to scare other dogs away; for example, if you lift your hand like you want to hit them, they may get fearful and react.

Dogs often experience feelings of anxiety when they’re in a new environment or when they’re around new people. Dogs can react differently to these feelings; research has shown that anxiety can affect all dog breeds regardless of their bravery. Anxiety can also be caused by being separated from family.

Since it’s an unpleasant feeling, it commonly results in aggression. Anxious dogs may end up destroying things or snapping out of fear, so observe your dog and the situations they become aggressive in to see if anxiety can be the cause.

In history, when dogs lived in groups, there were specific rules they had in place to prevent conflicts, such as an alpha male. These rules can also dictate who gets food, where to sleep, or who mates first. The rules are often reinforced via aggression through the stronger dogs. Higher-ranking dogs intimidate the weaker ones to remind them of their status in the pack; this can also be known as ‘status-seeking aggression.’

Social-related aggression is more common in male dogs than females and can be more common if the dog is purebred. This type of behavior develops when the dog is one to three years old.

Also known as ‘resource guarding,’ food aggression is shown when a dog becomes aggressive when you approach them when they’re eating. This can be projected towards humans or dogs, as the dog tried to protect their meal. This can have links to anxiety and primal instincts of not knowing where the next meal is coming from.

This aggression can be worked on through training methods and repetition. Resource guarding behavior can also be shown when a dog is possessive of a toy, person, or resting spot too.

Male dogs often fight over female attention when it comes to mating, so if you own both male and female, you might notice that the weaker male becomes aggressive due to the stronger ones won’t allow them to attract a mate. Again, this links to pack instincts and the dog’s statuses within the pack. Dogs may still exhibit sex-related aggression between males without a female present. This behavior is typical when the dogs are one to three. Due to hormonal instincts, this is often the type of aggression that is most linked to neutering.

Is There a Direct Link Between Neutering a Dog and a Reduction in Aggression?

When looking for a direct link to see if aggression is reduced by neutering, there isn’t as much evidence as you’d expect. Though neutering will rid the dog of hormones and reduce sex-based problems, any other behavioral issues will still be present. Many see neutering as an easy fix to reduce aggressive behavior; however, when the dog’s behavior is examined, and the real reason is found, it’s usually from outside stimuli and not hormones.

The majority of aggressive behaviors are from anxiety, stress, and frustration; these can be treated effectively by addressing the dog’s fear or discomfort through conditioning or by using reward-based training to teach a different behavioral response to the initial trigger. However, if your male dog is intact and displays aggression to other male dogs (especially when a female is present), neutering can help. Also, behavioral problems such as excessive mounting, roaming, and ‘humping’ can be reduced by neutering. 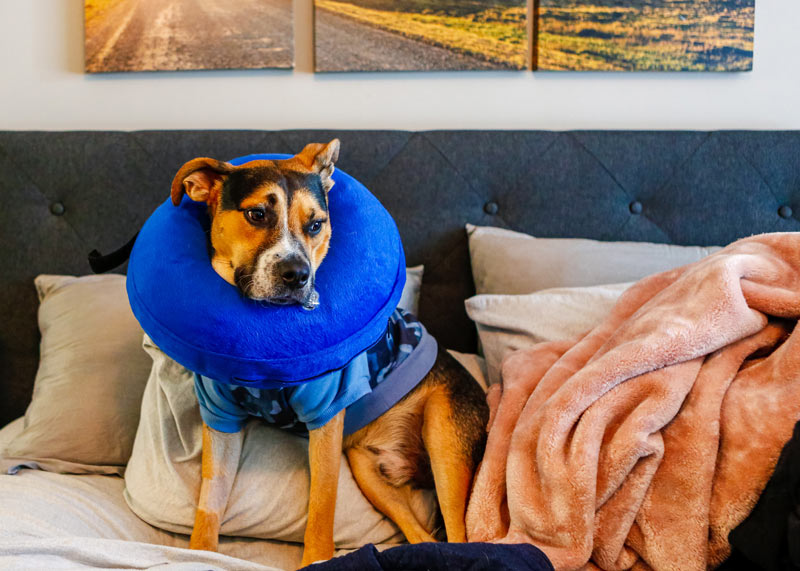 Should you neuter your dog?

Maybe you’ve realized that your dog is displaying aggression, and the cause isn’t hormones. Should you still go ahead and neuter your dog?

There are so many valid reasons and benefits to neutering your dog, aside from reducing aggression, that you should consider the procedure. The decision to neuter your dog should always be discussed with a veterinarian beforehand, and the pros and cons should always be weighed up.

Neutering is a safe surgery, and the recovery time is short, there are valid pros and cons for each case, and each dog is different. The takeaway at the end of the day is that you can’t expect it to fix your dog’s aggression issues completely. 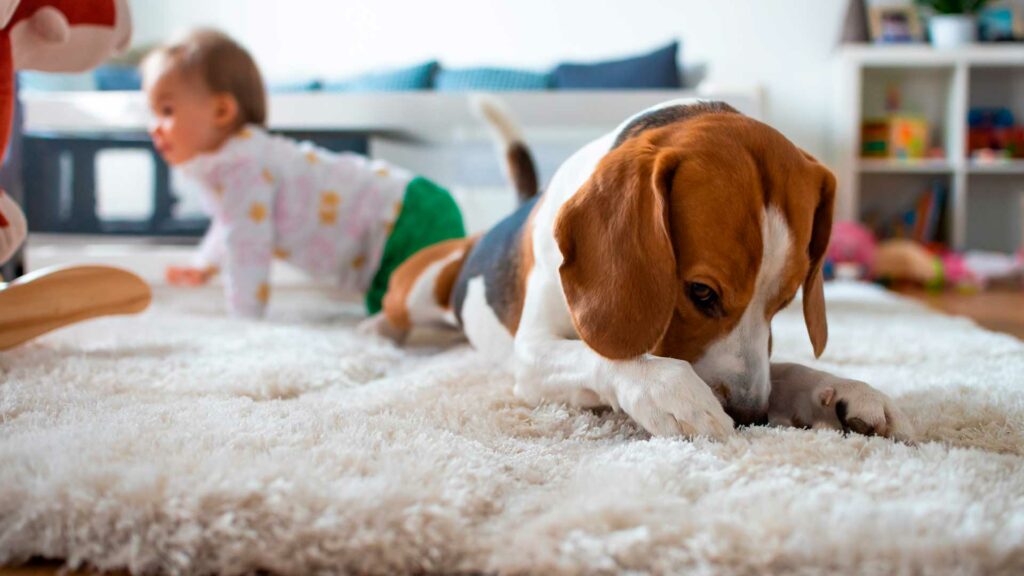 Why Is My Dog
Licking The Carpet? 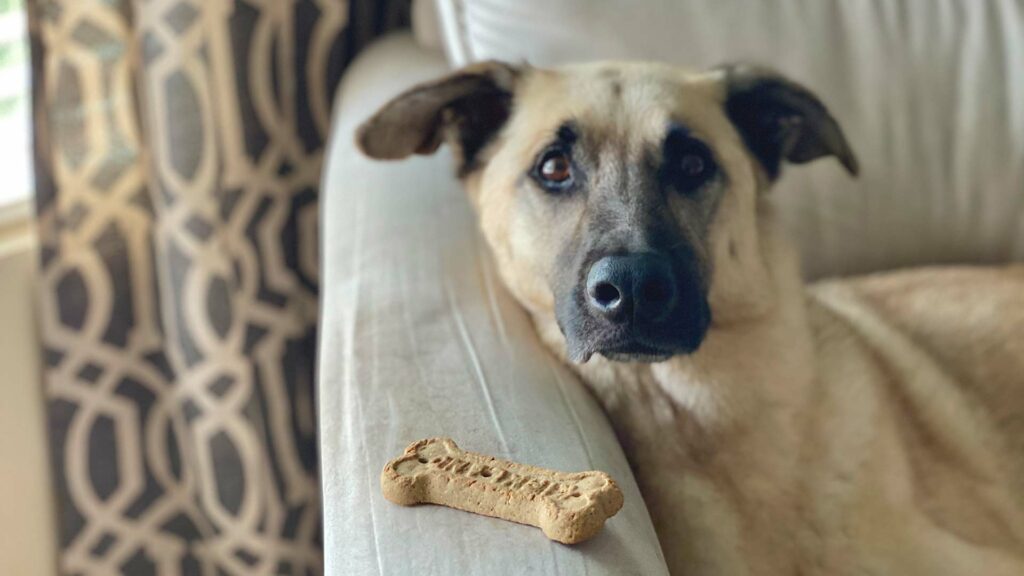 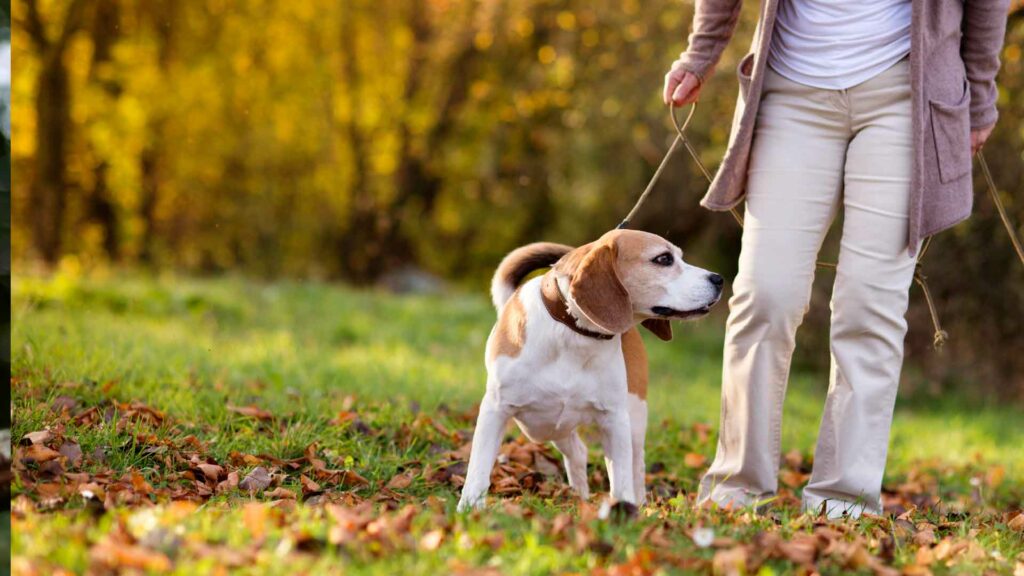 Why Does My Dog Walk Around Me
In Circles?