How To Fix Food Aggression In Dogs?
[The Training Guide]

Having a dog is a beautiful journey, but there will always be challenges along the way. Sometimes dogs can develop aggression surrounding food, and though this is not uncommon, it can be challenging to deal with and can lead to further aggression in the future.

What Is Food Aggression? 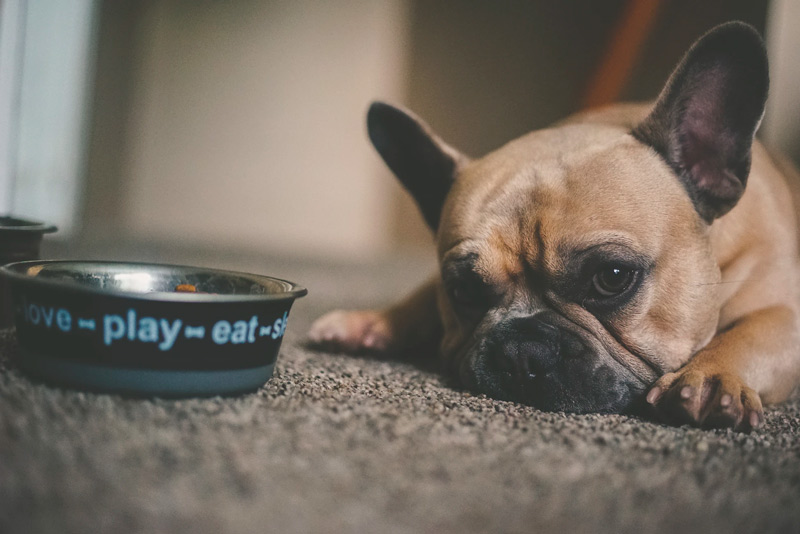 Food aggression is a territorial instinct where the dog will become protective over their food. While this sounds worrying, remember that it is relatively common – one study reported that approximately 20 percent of dogs show signs of food aggression.

The aggression can be towards humans or other animals, as they feel they need to guard the food and protect it. Food aggression can also extend to treats, as well as food.

Not all shows of food aggression are a show of dominance, as in dog packs, the alpha dogs will always eat first after a hunt, and the other dogs get their food according to their pack position. An alpha dog’s food aggression will link to dominance; however, dogs with lower positions will more likely show food aggression as a sign of anxiety. This behavior is linked to instinct and the primal feeling of not knowing when the next meal will arrive in the wild.

This behavior may be more of an issue when young children are present; since children are less likely to understand aggression signals, it could end in the dog biting them. Adults can be in danger of this too, but this will all come down to the severity of the dog’s food aggression and their comfort at home.

To recognize food aggression, observe your dog while they’re eating and see if their body stiffens or if they cover their food with their head. This body language can indicate that they’re covering their meal to protect it.

Another sign of food aggression is the dog’s ears positioned back, the whites of their eyes showing, and their tail is lowered. Signs range between dogs, and one dog may show few while another may exhibit all of them. At the more severe end of the spectrum

Mild cases are usually recognized by verbal signs, such as growling, when you approach the food. It can also be shown through bearing their teeth when you come too. Moderate cases of aggression present through the dog lunging or snapping when approached. Severe cases are shown through biting or chasing when the dog feels threatened; these signs are often more dangerous to people or other animals.

What Are The Causes?

Usually, there isn’t one obvious cause of food aggression in dogs; however, there are some common reasons.

Some dog breeds are more likely to display aggressive behavior due to genetics and dominant tendencies. These are dogs that evolved with pack mentalities. Examples of these are German Shepherds, English Springer Spaniels, and Rottweilers; they all usually display hereditary guarding instincts.

Another possible cause is what the dog learned during puppyhood. This could be by accidental training practices or having to compete for food with other puppies.

It’s also speculated that dogs can start showing aggressive behaviors later in life due to triggers like trauma. These traumas can be caused by losing a caretaker, physical abuse, or neglect. Some even argue that natural disasters or fights with other dogs can cause food aggression because they become protective of what is theirs.

How To Stop Food Aggression 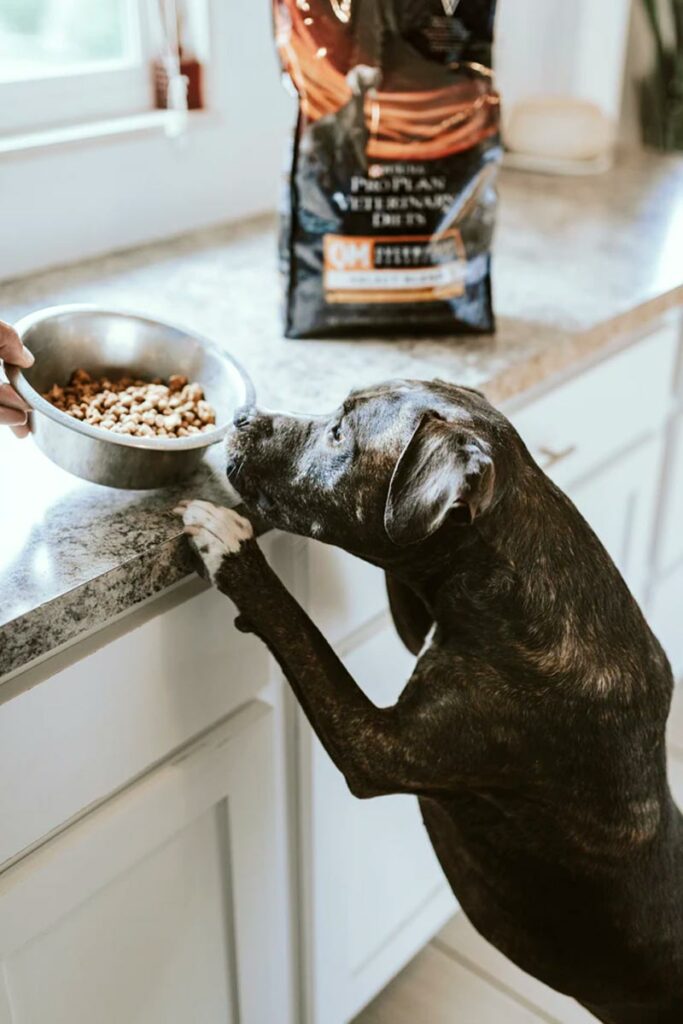 If you’re thinking that your dog is displaying signs of food aggression, don’t worry! These behaviors can be managed and prevented.

One of the best first steps (if you haven’t already done so) is to consider neutering or spaying your dog. Hormones can cause aggression, so making this routine medical procedure will certainly help relieve aggressive behavior.

Training is a good option if you don’t want to neuter (or already have done it). A training sequence focuses on desensitization and counterconditioning to put your dog at ease when eating around others. A training sequence includes seven steps to help reduce food aggression.

Stage One: Help Your Dog Feel Used To Presence While Eating

When food aggression is displayed, dogs often feel uneasy having anyone present while they feed. This first step focuses on helping them feel calmer.

Allow your dog to eat while you stand a couple of feet away, don’t stand over them. Repetition is key in this step. Practice this step for a while; after ten feeds with your dog in a calmer state, you’ll be able to move on to step two.

When your dog is more comfortable with you there while eating, try adding one of their favorite treats to their bowl. Once you’ve added the treat, immediately step back and give them some distance.

Again, repetition is key here. You want to be consistent until you see changes in their behavior while eating. If your dog becomes more relaxed, try giving a treat and then standing a couple of feet closer. When this is achieved, you can move to the next step.

Naturally, the next step is to stand closer to your dog while they eat. Adding conversation into the activity will also help to normalize your presence. Make sure to give them a special treat while you do this.

When speaking to them, use a soft and conversational tone. Ask questions like “What are you having to eat?”. Keep the focus on food. After you’ve given them a treat, turn, and walk away. Try to repeat this process every few seconds; if your dog remains calm while eating for ten or more meals in a row, you can move to the next training step.

Hand-feeding is one of the most essential parts of the training process. This engages the dog and helps to remind them that you’re not trying to steal their food.

Calmly approach your dog and continue speaking to them in a conversational tone. Try to stand next to their bowl and hold your hand out with a treat. Don’t place the treat in their bowl; let them take it out of your hand.

Once they’ve accepted the treat, turn, and walk away to show that you’re not interested in their food. As you repeat this step, bend down further and further so that you’re becoming closer to them – without being overbearing. Do this until your hand is right next to their bowl. When this step is completed successfully ten or more times in a relaxed fashion, move to the next stage.

This is a similar stage to the last, except this time, make sure to stay near your dog after they eat the treat.

Keep speaking to them in a calm and conversational voice, and keep offering the treat with your hand. With your free hand, touch their bowl but don’t take any food from it. This will start getting your dog used to the company during meals. This step may take longer to complete as you’re coming very close to their food, however, persevere, and after ten successful meals, move to the next step.

Stage Six: Lift Their Bowl And Give Them Their Treat

Step six focuses on trust-building as you’ll finally be interacting with their food bowl. Here you start to lift their bowl from the ground to give them a treat.

Use your calm tone to speak to them as you pick their food bowl up. It’s suggested that you only lift it 6-12 inches off the ground to start with and then gradually build up. Aim to lift the bowl slightly higher every day until you can place it on a table to prepare the treat. Keep repeating this action until you can walk a short distance away to put your dog’s bowl back in the same place from which you picked it up.

The repetition of this step builds trust between you and your dog, allowing them to become comfortable by the end of this stage.

Stage Seven: Allow Other Family Members To Try These Steps

If there are other people in your household, allow them to act out steps one to six to build trust while feeding. Getting the dog to feel at ease with every member of the house will reduce food aggression as they feel no threat. Practice and time are crucial to reducing the feeling of defensiveness with food. 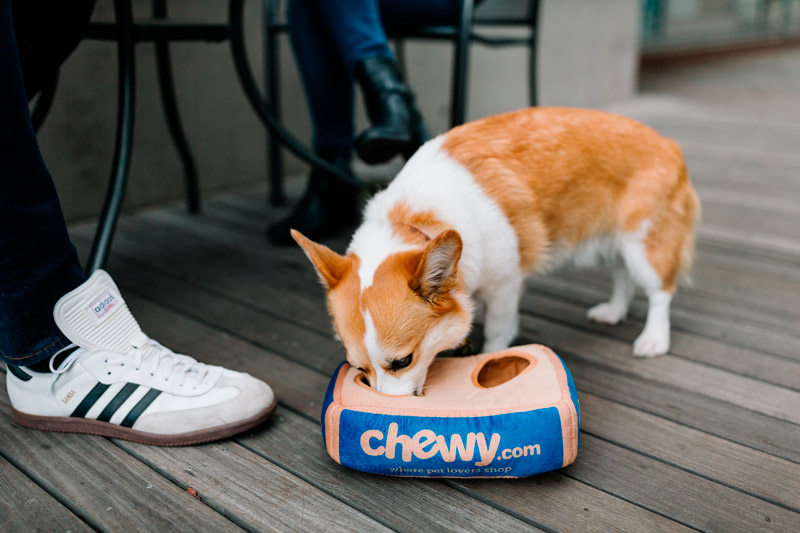 Here are some essential techniques to remember when trying to reduce food aggression:

Hand feeding is a crucial technique to use since hands carry a scent. The goal is to familiarise the dog with your presence and eliminate you as a threat to their food.

When giving your dog treats, approach them with a treat that they prefer to their meal. This will stop their defensive eating and will incentivize taking the treat from your hand. Leaving treats in their bowl when they’re not eating can also help reinforce that people being near their food bowl isn’t a bad thing.

After successfully repeating the steps above, your dog will become comfortable eating around you; however, if you often have guests or visitors over, this may cause a challenge. If this happens, try to create a safe environment for your dog to eat in. This could be separate bowls for each pet, providing a gated area to eat in, or even separating them at mealtimes. 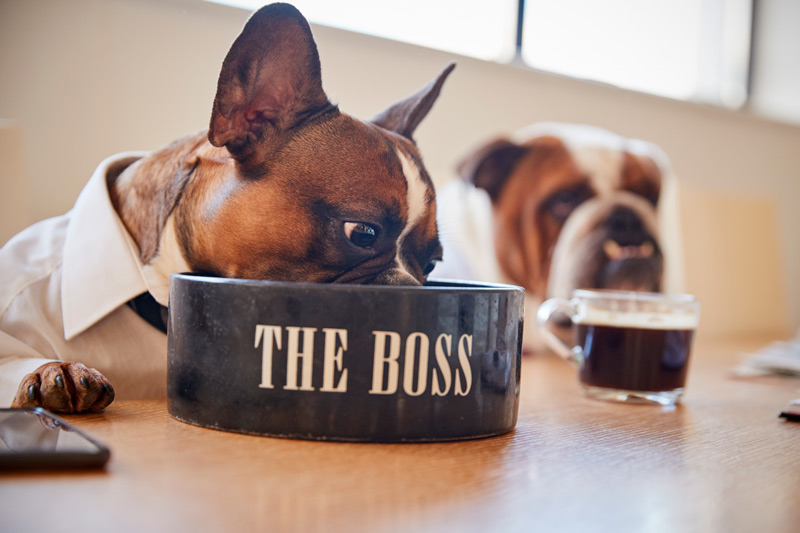 Ensuring your pet is comfortable is very important for your relationship; remember that they don’t mean any harm while being aggressive – they’re just protective of their food and want to eat.

If you try the training steps and your dog’s behavior doesn’t improve, consider consulting a vet or a dog trainer for a professional opinion. 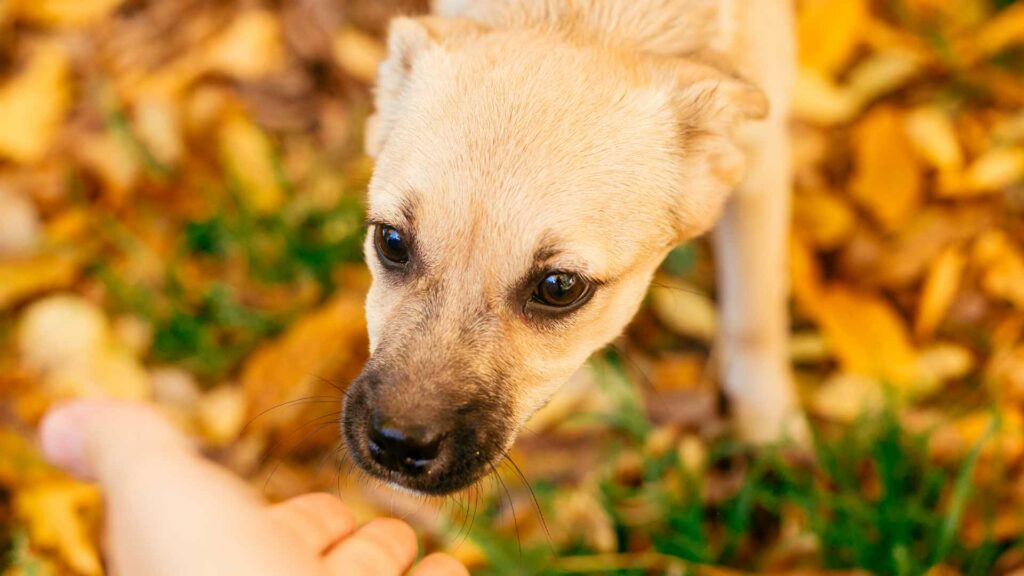 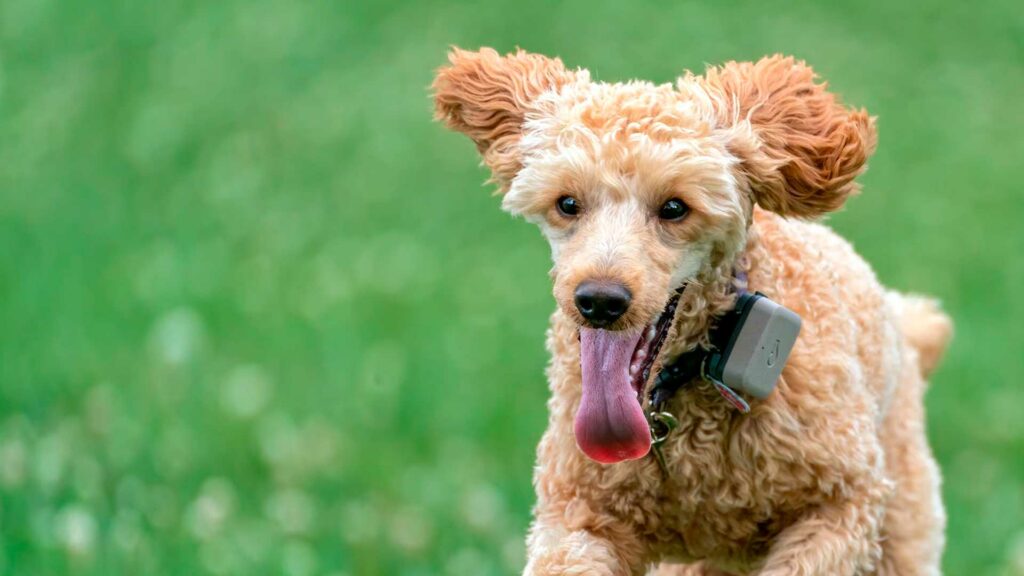 How To Properly Train A Dog With A
Shock Collar? 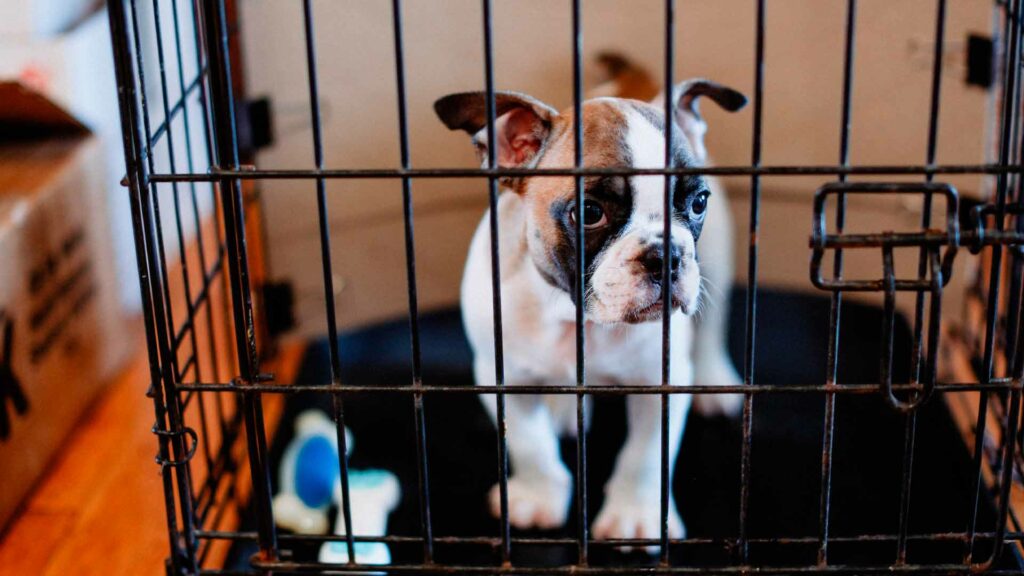 How To Keep Dog From
Escaping His Crate?